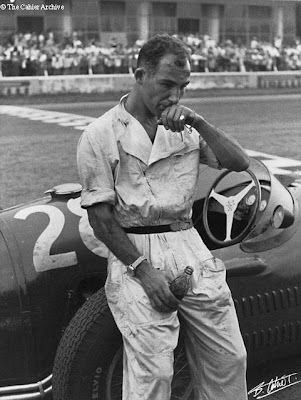 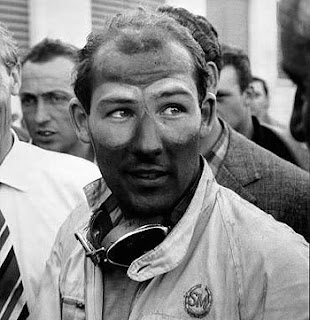 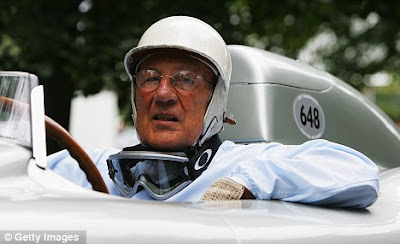 Sir Stirling Craufurd Moss, OBE (born 17 September 1929 in London) is a former racing driver from England. His success in a variety of categories placed him among the world's elite – he is often called "the greatest driver never to win the World Championship"

Moss was educated at two independent schools: at Clewer Manor Junior School, a preparatory school linked to the senior school Haileybury and Imperial Service College, and then to the senior school, both of which were for boys (but are now co-educational), and located at Hertford Heath, near Hertford in Hertfordshire.

Moss, who raced from 1948 to 1962, won 212 of the 529 races he entered, including 16 Formula One Grands Prix. He would compete in as many as 62 races in a single year and drove 84 different makes of car over the course of his racing career, including Lotus, Vanwall, Maserati, Jaguar, Ferrari and Porsche. Like many drivers of the era, he competed in several formulae—very often on the same day.
He retired in 1962 after a crash left him in a coma for a month as afterwards he felt unable to continue driving at a professional level. In spite of this early retirement he has remained a well known figure.
Moss is the son of Alfred E. Moss, who was placed 14th at the 1924 Indianapolis 500 in a "Fronty" Ford and Aileen (née Craufurd). His younger sister, Pat Moss, also took part in rallying; her widower is rally driver Erik Carlsson. Moss was one of the first customers of the Cooper Car Company when he persuaded his father, Alfred Moss, to get him one of the new Cooper 500 cars. He quickly demonstrated his ability with numerous wins, at national and international level, and continued to compete in Formula Three, both in Coopers and Kieft cars long after graduating to the senior categories.
Moss was a pioneer in the British Formula One racing scene and placed second in the Drivers' Championship four times in a row from 1955 to 1958.
Moss finished second in the 1952 Monte Carlo Rally driving a Sunbeam-Talbot 90 with co-driver John Cooper. Cooper ran Moss in Formula One later in his career.
In 1954, he became the first foreign driver to win the 12 Hours of Sebring in a Cunningham, driving with American driver Bill Lloyd.
Moss's first Formula One win was in 1955 at his home race, the British Grand Prix at Aintree, driving the Mercedes-Benz W196 Monoposto for a convincing 1-2-3-4 win for the German marque. It was the first race where he finished in front of Juan Manuel Fangio, his teammate, friend, mentor and arch rival at Mercedes. It is sometimes debated whether Fangio, one of the all-time great gentlemen of sport, yielded the lead at the last corner to let Moss win in front of his home crowd. Moss himself asked Fangio repeatedly, "Did you let me win?" and Fangio always replied, "No. You were just better than me that day." [5]

One of his best remembered drives was in the 1955 Mille Miglia, the Italian 1000 mile (1597 km) open-road endurance race, which he won in the record time of 10 hours, 7 minutes, and 48 seconds, finishing almost half an hour ahead of teammate Fangio in second place. His navigator in the Mercedes-Benz 300 SLR #722 (indicating the time of the start) was journalist Denis Jenkinson. As navigator, he supported Moss with navigational notes in the form of a Roller Map, which listed all the details of the long road trip, then an innovative technique. This assistance helped Moss compete against drivers who had a lot of local knowledge of the route. Jenkinson later wrote extensively about the experience.
In 1957 Moss won on the longest circuit to ever hold a Grand Prix, the daunting 25 kilometre Pescara Circuit, again demonstrating his skills at high speed, long distance driving. He beat Fangio, who started on pole, by a little over 3 minutes over the course of a gruelling 3 hour race.
Moss believed the manner in which the battle was fought was as important as the outcome. This sporting attitude cost him the 1958 Formula 1 World Championship. When rival Mike Hawthorn was threatened with a penalty in the Boavista Urban Circuit in Porto, Portugal, Moss defended Hawthorn's actions to race stewards contemplating a penalty to Hawthorn. Hawthorn was accused of reversing in the track after spinning his car. Hawthorn went on to beat Moss by one point, even though he had only won one race that year to Moss's four, making Hawthorn Britain's first World Champion.

Moss was as gifted at the wheel of a sports car as he was in a Grand Prix car. For three consecutive years (1958–1960) he won the grueling 1000 km race at Germany's Nürburgring, the first two years in an Aston Martin (where he won almost single-handedly) and the third in the memorable Tipo 61 "Birdcage" Maserati, co-driving with a young American prospect named Dan Gurney.
In the 1960 season, he had a huge accident at the Burnenville sweep during practice for the Belgian Grand Prix at Spa-Francorchamps and was severely injured in what was to be one of the darkest weekends in the history of Formula One. He missed 3 races and did not race for most of that year. He recovered sufficiently to return to competition late in the year and won the season-ending U.S. Grand Prix at Riverside, California.
For the 1961 F1 season, which was run under the new 1.5-litre rules, Enzo Ferrari rolled out his state-of-the-art Ferrari 156, also known as Sharknose. Moss was stuck with an underpowered Coventry-Climax-powered Lotus, but managed to win the 1961 Monaco Grand Prix by 3.6 seconds, and later also the partially wet 1961 German Grand Prix. Some observers have noted that, while taking nothing away from Moss' superlative performances in these races, there were other factors at play. At Monaco, the tight circuit negated the horsepower advantage of the powerful but heavy and ill-handling Ferraris; and at the Nürburgring, Moss and manager Ken Gregory made a risky but inspired decision to fit super-soft rain tyres on the Lotus after a pre-race shower had soaked the track. Had the skies cleared and the track dried, the decision would have been disastrous for Moss. But when rain returned, Moss was able to drive away from the Ferraris of Phil Hill and Wolfgang von Trips (while nursing rapidly deteriorating tyres) to take the win.
In 1962, Moss was badly injured in a crash at Goodwood while driving a Lotus in the Glover Trophy. The accident put him in a coma for one month and partially paralyzed the left side of his body for six months.[6] He recovered but decided to retire from racing after a private test session in a Lotus 19 the next year. During this session, he lapped a few tenths slower than before, and did not feel he had the command of the car to which he was accustomed. Many racing and medical observers have speculated that Moss simply tried to return too soon — that another six months of recovery and training would have allowed him to regain most of the physical acuity that distinguished him. He made a brief comeback in the British Touring Car Championship in 1980 with Audi alongside Martin Brundle, the BBC's Formula One commentator, and in recent years has continued to race in historic cars, racing his OSCA FS372 during the 2009 season.
During his career, Moss drove a private Jaguar, and raced for Maserati, Vanwall, Cooper, and Lotus, as well as Mercedes-Benz. He preferred to race British cars stating "Better to lose honorably in a British car than win in a foreign one".[6] The British cars were often uncompetitive and this was considered the reason he never won the drivers' championship. At Vanwall, he was instrumental in breaking the German/Italian stranglehold on F1 racing (as was Jack Brabham at Cooper). Moss remained the most successful English driver in terms of wins until 1991 when Nigel Mansell overtook him, after competing in many more races. 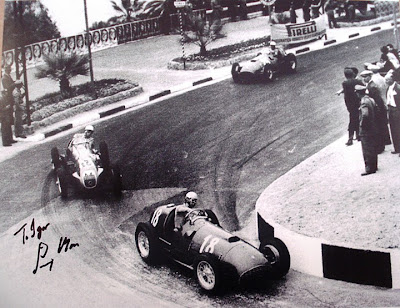 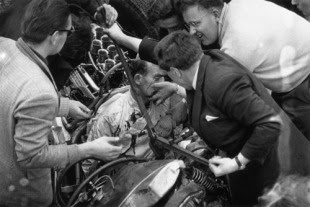 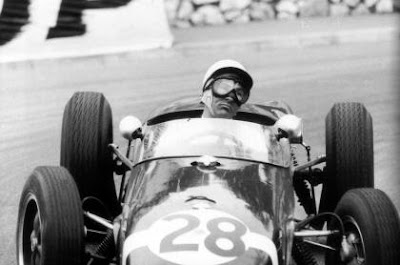