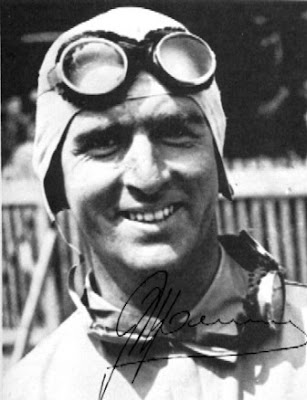 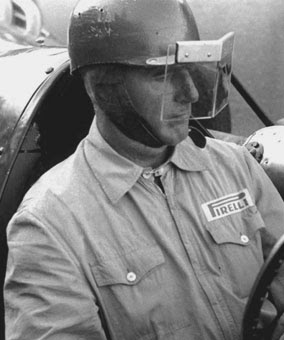 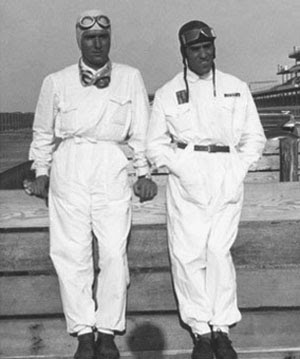 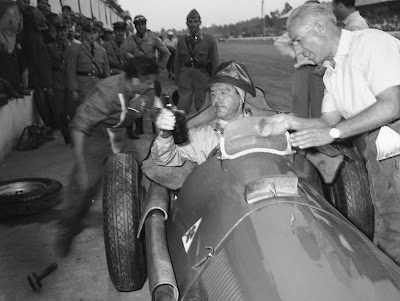 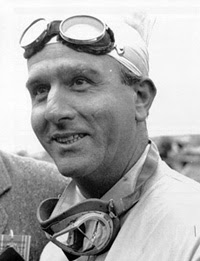 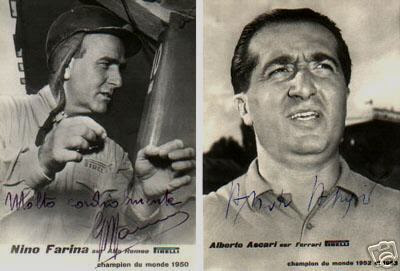 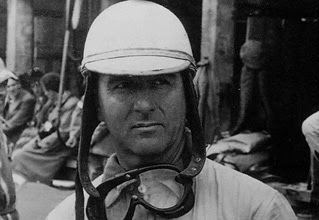 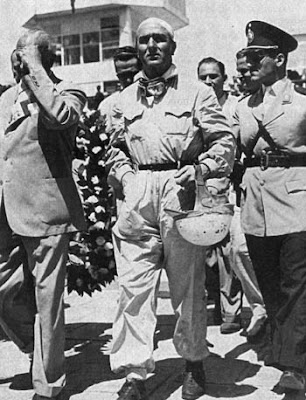 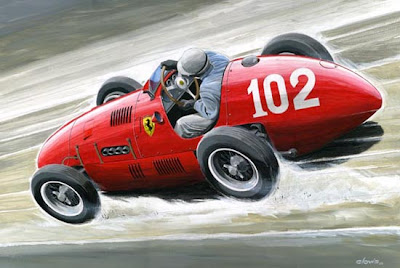 Emilio Giuseppe "Nino" Farina (30 October 1906, Turin, Piedmont - 30 June 1966) was an Italian racing driver. He stands out in the history of Grand Prix motor racing for his much copied 'straight-arm' driving style and his status as the first ever Formula One World Champion.


Born in Turin, Italy and nicknamed "Nino", Farina was a doctor of engineering and nephew of Pinin Farina of the coach building company. He began his motor racing career in hillclimbs, graduating to circuit racing with Maserati. But it was not until he moved to Alfa Romeo, as number two driver to Tazio Nuvolari, that his racing career really blossomed. During the late 1930s he won numerous minor races in the Voiturette class, securing himself the Italian Drivers' Champion three years in a row (1937–1939). He then went on to take his first major race win, at the 1940 Tripoli Grand Prix in Libya. Sadly for Farina, he was just reaching his peak as a driver at the outbreak of World War II, and it would be another eight years before he would win a major race.
Entering post-war Grands Prix in a privately owned Maserati, Farina took a win at the 1948 Monaco Grand Prix. When the Fédération Internationale de l'Automobile announced the inaugural World Championship for 1950, Farina secured a drive alongside Juan Manuel Fangio and countryman Luigi Fagioli at the dominant Alfa Romeo team, driving the invincible 158 Alfetta cars. Farina took 3 wins from the 7 races of the 1950 season, securing himself the first ever World Championship. It was the pinnacle of his career.
In 1951, he was forced to play second fiddle to Fangio, whose pace was too much for Farina to match. Farina had to make do with a solitary success at the 1951 Belgian Grand Prix, and wins at non-championship races. Moving to Ferrari in 1952, Farina found himself being outdone by another younger team-mate, this time Alberto Ascari who went on to win nine successive World Championship Grand Prix in 1952 and 1953.
Farina's first win for Ferrari, and the last of his 5 World Championship wins, came at the Nürburgring in the 1953 German Grand Prix. That year, he also teamed up with fellow F1 driver Mike Hawthorn to win the Spa 24 Hours endurance race. At the beginning of 1954, Farina won a round of the World Sports Car Championship, only to be badly burnt following a startline crash at the Sports Car race at Monza. Farina attempted a comeback in 1955, dosing himself with painkillers and scoring a couple of points finishes. However, conceding defeat, he retired from Formula 1 at the end of the season.
In 1956 he made a half-hearted attempt at the Indianapolis 500, crashing in the process, only to break his collar bone after a crash at a minor race at Monza. Again he recovered and tried the Indy 500, but this time his team-mate had a fatal crash while practicing in Farina's race car, and Farina decided to give up for good.
A notable character in early World Championship Grand Prix racing, Farina was noted for his driving style and intelligence, but also his petulant streak and his disregard for his fellow competitors on the race track. He was involved in the fatal accidents of Marcel Lehoux in the 1936 Grand Prix de Deauville[3] and László Hartmann at Tripoli in 1938 [4][5]. It was ironic that after all the injuries he sustained in the latter part of his career, it was in a car crash that he finally lost his life at Chambéry in France, whilst driving to spectate at the 1966 French Grand Prix.