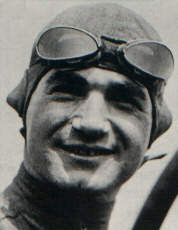 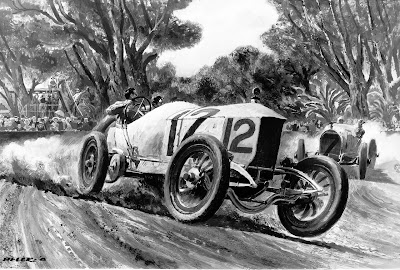 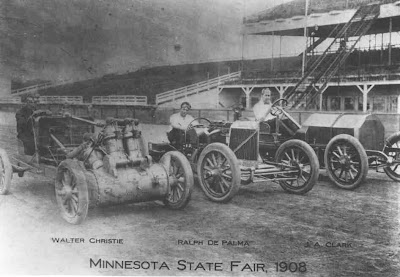 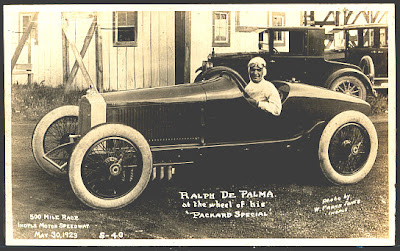 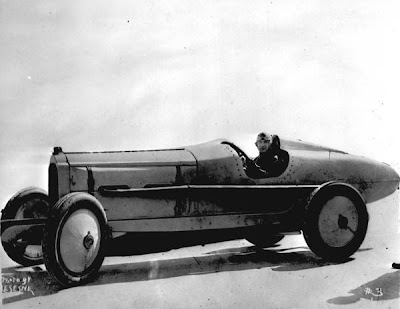 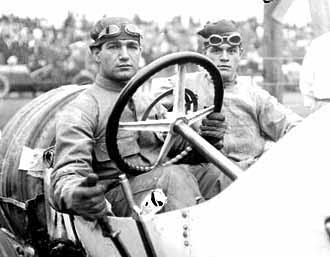 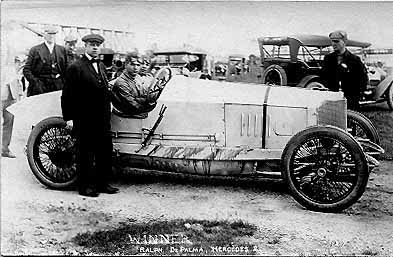 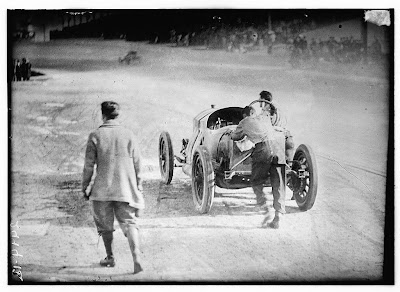 Born in Troia, Apulia, Italy, DePalma's family emigrated to the United States in 1893.[1] As a young man he tried bicycle racing with mixed success, but at the age of twenty-two he began racing motorcycles before switching to the automobile dirt track racing circuit in 1909, the year that the American Automobile Association established the national driving championship.
DePalma was immediately successful in car racing. In 1911, DePalma won the first Milwaukee Mile[4] Championship Car race. However, he is still remembered for the dramatic manner in which he lost the 1912 Indianapolis 500. After leading the entire race since the third lap, for some 196 of the 200 laps, his Mercedes cracked a piston and with only 2 laps remaining, he and his mechanic had to push the car across the finish line to take twelfth place.[3] At that time, only cars completing the full 200 laps received any prize money. This Mercedes remains on display at the Indianapolis Motor Speedway Hall of Fame Museum. He went on to earn the U.S. national driving championship that year,[1] but was almost killed in an accident at on October 5 at the Milwaukee Mile during the 400-mile Vanderbilt Cup. After being impaled by a corn stalk, he was hospitalized for 11 weeks;[2] he recovered and was back to racing the following spring.
In 1912 and again in 1914, DePalma won the Elgin National Trophy at Elgin, Illinois[2] and in 1914 he scored what he called his greatest victory when he beat Barney Oldfield to capture the Vanderbilt Cup on the roads of Santa Monica, California.[3] He entered the 1914 Indianapolis 500 but was not able to finish the course.
DePalma had been let go by the Mercer Automobile Co. racing team in favor of Barney Oldfield.[1] In a Mercedes "Gray Ghost," he showed he was a master tactician in beating Oldfield's much faster car.[3] He ended 1914 by winning his second U.S. national driving championship.[1] The following year, 1915, he drove to victory at 1915 Indianapolis 500 with a Mercedes 4.5 liter Gp car.
Ralph DePalma was an intense competitor but one of the most popular racers with his fellow drivers and the fans because of his good sportsmanship, a quality he displayed on and off the track. In June 1917 he lost to Barney Oldfield in a series of 10 to 25 mile match races at the Milwaukee Mile. On February 12, 1919 at Daytona Beach, Florida, he drove a Packard to a world speed record of 149.875 mph (241.200 km/h) over a measured mile (1.6 km).[3] International competition began following the adoption of the three liter engine limit in the U.S. and Europe in 1920. DePalma began the year driving for the French manufacturer, Ballot. His Ballot vehicle won the pole position for the 1920 Indy race[5] and he led for many laps[5] but bad luck dogged him in the race (faulty bearings on the Ballot) and he did not finish[5]. Then in 1921 DePalma traveled with other Americans to Le Mans to compete in the French Grand Prix. There, he finished second to the Duesenberg driven by fellow American, Jimmy Murphy. DePalma won the Canadian national championship in 1929.[3]
DePalma later competed in stock cars until he retired from racing in 1936.[1] In his career, he competed in 2,889 races in America and Europe and won 2,557, according to his Associated Press obituary that appeared in the Detroit Free Press on April 1, 1956.[2] He was an honorary referee for the Indianapolis 500, the last time in 1954.[3]

He died at his home in South Pasadena, California from cancer in 1956.[2][6] He was interred in the Holy Cross Cemetery in Culver City, California.