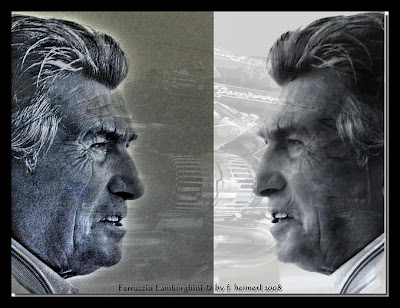 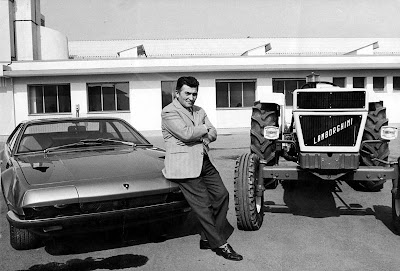 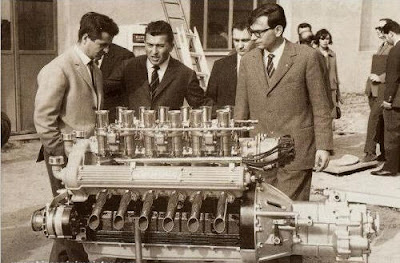 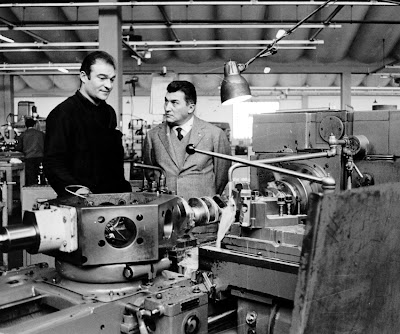 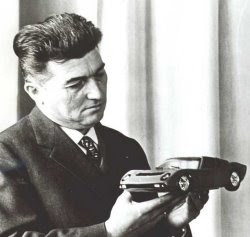 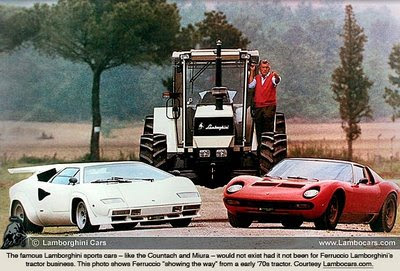 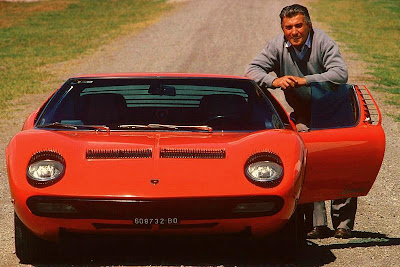 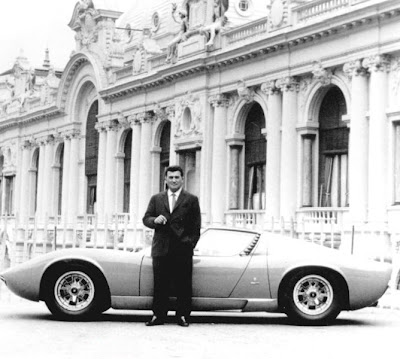 Ferruccio Elio Arturo Lamborghini (April 28, 1916 – February 20, 1993) was an Italian industrialist. Born to grape farmers from the comune of Renazzo di Cento in the Emilia-Romagna region, his mechanical know-how led him to enter the business of tractor manufacturing in 1948, when he founded Lamborghini Trattori, which quickly became an important manufacturer of agricultural equipment in the midst of Italy's post-war economic reform. In 1959, he opened an oil heater factory, Lamborghini Bruciatori, which later entered the business of producing air conditioning equipment. In 1963, he most famously created Automobili Lamborghini, a maker of high-end sports cars. Lamborghini sold off many of his interests by the late 1970s, and retired to an estate in Umbria, where he pursued winemaking.

Ferruccio Lamborghini was born on April 28, 1916, to viticulturists Antonio and Evelina Lamborghini, in house number 22 in Renazzo di Cento, a frazione of the comune of Cento, in the Province of Ferrara, in the Emilia-Romagna region of Northern Italy.[1][2] According to his baptismal certificate, he was baptised four days later, on May 2.[3] The young Lamborghini was drawn to the farming machinery rather than the farming lifestyle itself, and he studied at the Fratelli Taddia technical institute near Bologna.[Notes 1] In 1940, he was drafted into the Regia Areonautica Royal Italian Air Force,[4][5] where he served as a mechanic at the Italian garrison on the island of Rhodes[Rodi] territory of the Kingdom of Italy since 1911, after the Italian -Turkish war, becoming the supervisor of the vehicle maintenance unit.[1][Notes 2] Lamborghini was taken prisoner when the island fell to the British at the end of the war in 1945, and was not able to return home until the next year.[6] He married, but his wife died in 1947 while giving birth to his first child, a boy named Antonio.[5]

After the war, Lamborghini opened a garage in Pieve di Cento. In his spare time, Lamborghini modified an old Fiat Topolino he had purchased, the first of many that he would own over the years.[7] He made use of his mechanical abilities to transform the homely city car into a roaring 750-cc open-top two-seater, and entered the car in the 1948 Mille Miglia. His participation ended after 700 miles (1,100 km) when he ran the car into the side of a restaurant in the town of Fiano, in Turin.[5] As a result, Lamborghini lost his enthusiasm for motor racing, a sentiment that would endure for many years to come.[8]

For years, Italy's industrial output had been dedicated to the war effort, neglecting the production of agricultural equipment that was desperately needed for Italy's postwar economic reconstruction.[8] Lamborghini built a tractor for his father using spare parts, including a six-cylinder Morris engine, a General Motors transmission, and a Ford differential.[5] Antonio's friends soon clamored for their own examples of Ferruccio's design. Working from a stock of surplus Morris engines[9] and leftover military hardware, Lamborghini went into business building tractors in 1948,[10] when he opened Lamborghini Trattori S.p.A. in his Pieve di Cento garage.[1][Notes 3]
Beginning with a model called the Carioca, by the mid-1950s, Lamborghini Trattori was producing over 1000 tractors per year;[5] over the course of the decade, Lamborghini became one of the largest agricultural equipment manufacturers in the country, with his black-and-white tractors becoming a familiar sight in Italy.[11] In 1959, Lamborghini opened a oil heater factory, Lamborghini Bruciatori S.p.A., using technology acquired on a visit to the United States. The company later began building air conditioning units, changing its name to Lamborghini Calor.[4][11][12][Notes 4] He also sought to move into the business of building helicopters, but failed to secure a license to do so from the Italian government.[1]

Lamborghini's increasing wealth allowed him to purchase faster, more expensive cars than the tiny Fiats he had tinkered with during his youth. He owned cars such as Alfa Romeos and Lancias during the early 1950s, and at one point, had enough cars to use a different one every day of the week, adding a Mercedes-Benz 300SL, a Jaguar E-Type coupé, and two Maserati 3500GTs.[7] Of the latter, Lamborghini said, "Adolfo Orsi, then the owner of Maserati, was a man I had a lot of respect for: he had started life as a poor boy, like myself. But I did not like his cars much. They felt heavy and did not really go very fast."[7]
In 1958, Lamborghini traveled to Maranello to buy a Ferrari 250GT, a two-seat coupé with a body designed by coachbuilder Pininfarina. He went on to own several more over the years, including a Scaglietti-designed 250 SWB Berlinetta and a 250GT 2+2 four-seater.[7] Lamborghini thought Ferrari's cars were good,[7] but too noisy and rough to be proper road cars, categorizing them as repurposed track cars with poorly-built interiors.[11]
Lamborghini found that Ferrari's cars were equipped with inferior clutches, and required continuous trips to Maranello for rebuilds; technicians would secret the car away for several hours to perform the work, much to Lamborghini's annoyance. He had previously expressed dissatisfaction with Ferrari's aftersales service, which he perceived to be substandard.[11] Lamborghini brought his misgivings to Enzo Ferrari's attention, but was dismissed by the notoriously pride-filled Modenan.[7][Notes 5] After successfully modifying one of his personally-owned Ferrari 250GTs to outperform stock models, Lamborghini gained the impetus to pursue an automobile manufacturing venture of his own, aiming to create the perfect touring car that he felt no one could build for him.[11][13] Lamborghini believed that a grand tourer should have attributes that were lacking in Ferrari's offerings, namely high performance without compromising tractability, ride quality, and interior appointments. A clever businessman, Lamborghini also knew that he could make triple the profit if the components used in his tractors were installed in a high-performance exotic car instead.[9]

During the 1970s, Ferruccio Lamborghini's companies began to run into financial difficulties. In 1971, Lamborghini Trattori, which exported around half of its production of tractors, ran into trouble when its South African importer cancelled all its orders. In Bolivia, the new military government, which had recently staged a successful coup d'état, cancelled a large order of tractors that was being prepared for shipment in Genoa. Trattori's unionised employees could not be laid off, putting immense strain on the company. In 1972, Lamborghini sold his entire holding in the company to rival tractor builder SAME.[10][14]
Soon, the entire Lamborghini group found itself in financial trouble. Development at the automaker slowed as costs were cut. Ferruccio Lamborghini began courting buyers for Automobili and Trattori, entering negotiations with Georges-Henri Rossetti, a wealthy Swiss businessman and friend.[15] Ferruccio sold Rossetti 51% of the company for US$600,000, thereby relinquishing control of the automaker he had founded. He continued to work at the Sant'Agata factory; Rossetti rarely involved himself in Automobili's affairs.[14]
The situation did not improve: the 1973 oil crisis plagued sales of high performance cars of manufacturers from around the world. Consumers flocked to smaller, more practical modes of transportation with better fuel economy. By 1974, Ferruccio had become disenchanted with his car business. He severed all connections with the cars that bore his name, selling his remaining 49% stake in the automaker. The shares were acquired by René Leimer, a friend of Georges-Henri Rossetti.[1][16]
After departing the automobile manufacturing business, Lamborghini continued his business activities in other areas, including his heating and air conditioning company, Lamborghini Calor. In 1980, he founded Lamborghini Oleodinamica S.p.A., a manufacturer of hydraulic valves and equipment.[

Lamborghini retired to a 750-acre (3.0 km2) estate on the shores of Lake Trasimeno, in the frazione of Panicarola in Castiglione del Lago, a town in the province of Perugia in the Umbria region of central Italy.[18] Returning to his farming roots, he delighted in hunting and producing his own wines, and even designed his own golf course,[19] all the while continuing to manage several business interests.[7] Ferruccio remarried, and at age 58, fathered a child, Patrizia, with his second wife, Maria Teresa. He died at the Silvestrini Hospital in Perugia, on February 20, 1993, at the age of 76, from a heart attack.[5][20][21] Lamborghini is buried at the Monumental Cemetery of the Certosa di Bologna monastery.[2

The world of bullfighting is a key part of Lamborghini's identity.[23][24][25] In 1962, Ferruccio Lamborghini visited the Seville ranch of Don Eduardo Miura, a renowned breeder of Spanish fighting bulls. Lamborghini, a Taurus himself, was so impressed by the majestic Miura animals that he decided to adopt a raging bull as the emblem for the auto company he would soon found.[26]
After producing two cars with alphanumeric designations, Lamborghini once again turned to the bull breeder for inspiration. Don Eduardo was filled with pride when he learned that Ferruccio had named a car for his family and their line of bulls; the fourth Miura to be produced was unveiled to him at his ranch in Seville.[26][27]
The automaker would continue to draw upon the bullfighting connection in future years. The Islero was named for the Miura bull that killed the famed bullfighter Manolete in 1947. Espada is the Spanish word for sword, sometimes used to refer to the bullfighter himself. The Jarama's name carried a special double meaning; intended to refer only to the historic bullfighting region in Spain, Ferruccio was concerned about confusion with the also historic Jarama motor racing track.[28]
After christening the Urraco after a bull breed, in 1974, Lamborghini broke from tradition, naming the Countach not for a bull, but for countach! (pronounced [kunˈtɑʃ](

listen)), an exclamation of astonishment used by Piedmontese men upon sighting a beautiful woman.[29] Legend has it that stylist Nuccio Bertone uttered the word in surprise when he first laid eyes on the Countach prototype, "Project 112". The LM002 sport utility vehicle and the Silhouette were other exceptions to the tradition.
The Jalpa of 1982 was named for a bull breed; Diablo, for the Duke of Veragua's ferocious bull famous for fighting an epic battle against "El Chicorro" in Madrid in 1869;[30] Murciélago, the legendary bull whose life was spared by "El Lagartijo" for his performance in 1879; Gallardo, named for one of the five ancestral castes of the Spanish fighting bull breed;[31] and Reventón, the bull that defeated young Mexican torero Félix Guzmán in 1943. The Estoque concept of 2008 was named for the estoc, the sword traditionally used by matadors during bullfights.[32]

All of Ferruccio Lamborghini's companies continue to operate today in one form or another. His son Tonino designs a series of designer clothing and accessories under his full name.[33] His daughter, Patrizia runs the Lamborghini winery at his Umbria estate. A museum that honors his legacy, the Centro Studi e Ricerche Ferruccio Lamborghini, opened in 2001.[34] 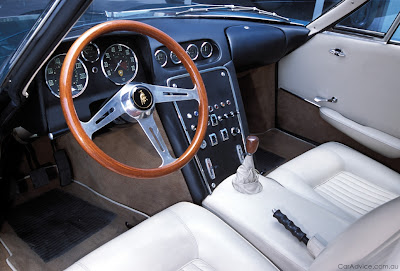 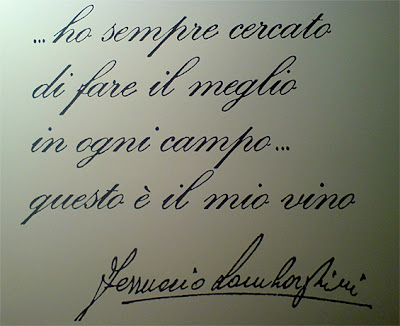