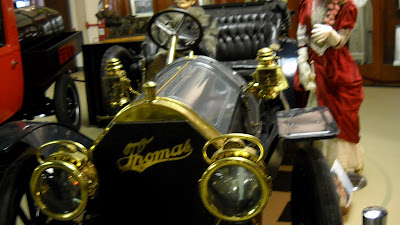 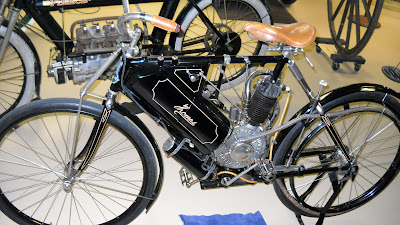 In 1896, E.R. Thomas of Buffalo, New York began selling gasoline engine kits for propelling ordinary bicycles. After forming the Thomas Motor Company, he began selling complete motor-assisted bicycles under the name Auto-Bi. The Auto-Bi is generally considered to be the first production motorized bicycle made in the United States.[1] By 1903, the company was the largest manufacturer of single-cylinder, air-cooled engines.[2] The 1904Auto-Bi had a 2.5-horsepower four-stroke 442cc single-cylinder engine, a belt-driven transmission, and could reach speeds of 35 mph (59 km/h). The Thomas Auto-Bi was later joined by the Auto-Tri, a three-wheeled motorcycle, and the Auto-Two Tri, a motorcycle that could hold three riders.
In 1905, the Thomas Auto-Bi established a new record for a transcontinental crossing of the United States in 48 days.[3] By 1912, the demand for motorcycles had dropped significantly, and the Thomas Motor company discontinued all production of two-wheeled machines.[4]

The 1904 Thomas was a touring car model. Equipped with a tonneau, it could seat 5 passengers and sold for US$2500. The vertically mounted water-cooled straight-3, situated at the front of the car, produced 24 hp (17.9 kW). A 2-speed planetary transmission was fitted. The steel-framed car weighed 1900 lb (862 kg). A modern cellular radiator was used for cooling. An 8 hp (6 kW) tonneau model sold for US$1250.

A 1907 Model 35 with 4 cylinders and 60 horsepower, dubbed Thomas Flyer, won the 1908 New York to Paris Race, the first and only around-the-world automobile race ever held. The race began in Times Square, New York, on February 12 and covered some 22,000 miles (35,000 km), finishing in Paris on July 30, 1908. Six teams started the race (one Italian, one German, three French, and the American Flyer). Only three of the cars finished, the Thomas Flyer which won, the German Protos, and the Italian Züst. The original intent was to drive the full distance using the frozen Bering Strait to drive across the Pacific Ocean. In the course of the race, the Flyer was the first car to cross the United States taking 41 days 8 hours and 15 minutes,[5] and the first to do so in the winter with George Schuster the first automobile driver to ever make the transcontinental winter crossing of the US.[6] Finishing in 169 days was a remarkable feat, considering the lack of roads and services in 1908. Schuster, the driver, was the only member of the Thomas crew to go the full distance.
The Flyer survived and was restored to the exact condition it entered Paris on that day by William F. Harrah. It is now on exhibit at the National Automobile Museum in Reno, Nevada. Additional details with numerous photos and videos on the 1908 New York to Paris Race are available at The Great Auto Race of 1908
The Germans arrived in Paris on July 26, 1908. The American Flyer arrived at the edge of the city on July 30, and initially was not allowed into Paris by police because it had a broken headlamp. A passerby offered the team a bicycle light. With no tools to remove the light, they simply strapped the bike on the Thomas Flyer so they could enter Paris and finish the race. The questionable setback put them in second with the Germans arriving first. It was later discovered the Protos took some shortcuts on its path and was penalized, so the American team that actually arrived second was declared the official winner of the epic race.
Pubblicato da BCM(Bellina Classic Motors) a 3:58 AM