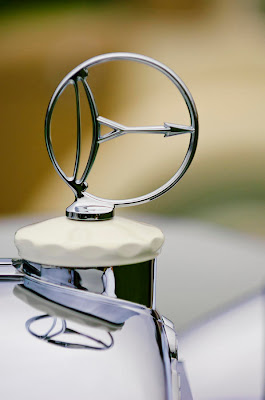 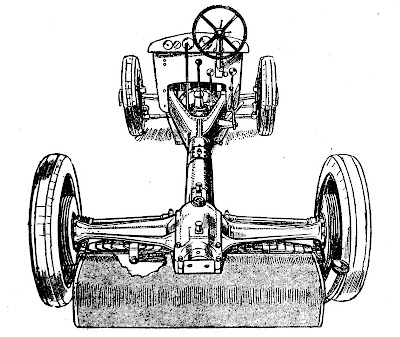 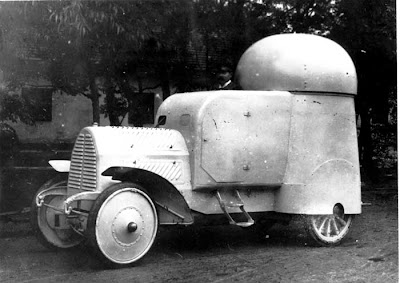 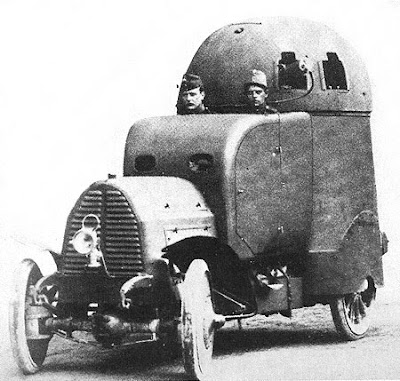 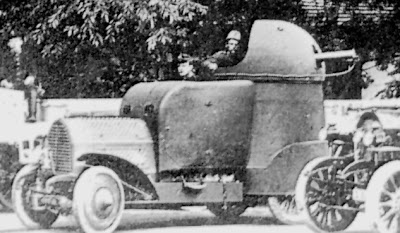 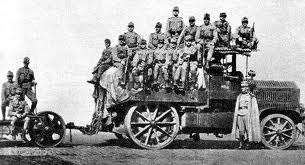 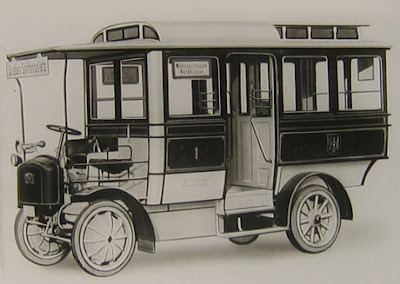 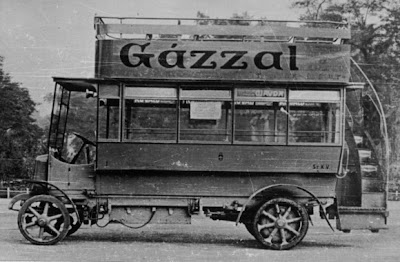 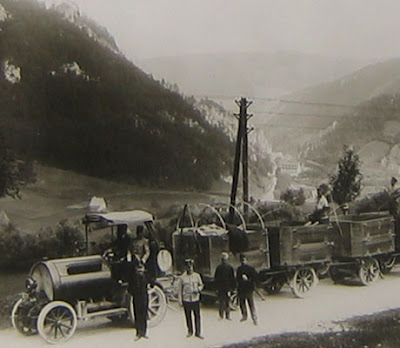 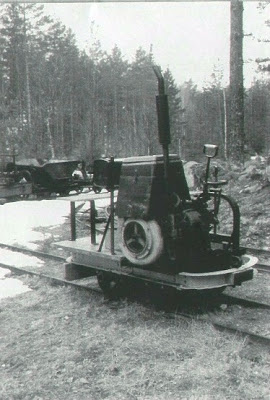 Austro-Daimler was an Austrian automaker company, from 1899 until 1934. It was subsidiary of the German Daimler Motoren Gesellschaft(DMG)

In 1890, Eduard Bierenz was appointed as Austrian retailer. The company sold so well that also it began manufacturing the automobiles after uniting with Eduard Fischer's engineering factory. The works were located at Wiener-Neustadt. By this subsidiary DMG became the first automotive multinational in history.
Thus on August 11, 1899, the Austrian Daimler Engine Society was founded. Whilst the assembling parts stemmed from Stuttgart, in 1900 they built their first automobile which featured 2 cylinders, 4 hp (3.0 kW), and 4 seats. Soon they started producing engines for luxurious cars, trucks, buses, maritime ships, and trains.

In 1902, Paul Daimler, Gottlieb Daimler's son, took charge of the Technical Department. He developed a compact car (8 hp, 45 km/h). In 1905 he built the company's first armoured car, which had 30 hp (22 kW). Also, the company produced engines for both trucks and buses. However, Daimler returned to Stuttgart in 1905 to take over the research and development department, which had been vacated by Maybach.

Senior Ferdinand Porsche took Daimler's place as technical designer. Although Austro-Daimler cars were competing at races already, Porsche pioneered into aerodynamic usage with famous racecars (Mixte and Maya). Also, he designed the Mercédès-Electrique-Mixte which was manufactured from 1902 until 1907.
Porsche impelled a company reformation too whilst the company had 800 workers already. The company was renamed Austro-Daimler on July 27, 1906. That same year Emil Jellinek — who was Austrian too — bought several Austro-Daimler licenses to found ancillary companies abroad.
In 1908, the Austro-Daimler began producing Zeppelin engines. Indeed, for Porsche this was a personal interest since he liked to take Archduke Franz Ferdinand flying over Vienna.
Pushing the company's development further, Porsche granted Austro-Daimler's definitive independence from DMG's ownership in 1909. In 1910, the company was renamed Austrian Daimler Engines AG whose logo was the Austrian Royal double-headed eagle. In 1912 DMG sold its remaining shares.

Postwar era
In 1911 Austro-Daimler began producing the Prinz Heinrich (in English: Prince Henry) model; this car, which featured an overhead cam 5,714-cc four-cylinder engine, quickly became famous. It could develop 95 bhp at 2,100 rpm; there was also a less potent version with side valves and a 6,900-cc engine capable of developing 60 hp (45 kW) at only 1,200 rpm. Both designs were by Porsche.
During the First World War, the 4,500 workers of Austro-Daimler contributed in large quantities to wartime production. After the war, the company returned to the production of automobiles. Austro-Daimler still claimed Royal patronage via its connection with Prince Heinrich.
Soon, the company began collapsing. In the first place, Austro-Daimler fused with several companies — Skoda, Fiat, and Puch (1928). Then, it was submerged under Camillo Castiglioni's squandering management.
At this time, Porsche created the 1.3-liter "Sascha" racing cars (named after their backer, Count Sascha Kolowrat-Krakowski) in the early 1920s. The smallest model the company offered was a 2,212-cc four-cylinder. However, as the economic situation worsened, Porsche abandoned the company in 1923, ridding himself of Austro-Daimler's financial difficulties. Instead, he moved to Stuttgart's DMG.
The outstanding production car offered by Austro-Daimler during the 1930s was the ADM, which featured overhead cam six-cylinder engines of 2,540 cc, 2,650 cc, and 2,994 cc. The last-named (the ADM III) developed 110 hp (82 kW) at 4,000 rpm and was one of the greatest automobiles of the decade. Also offered was a less luxurious sporting version, the 100 hp (75 kW) ADR.
1931 saw Austro-Daimler introduce a 4,624-cc eight-cylinder car, a superb, highly expensive luxury vehicle. The last great car built at the Austrian works was the six-cylinder "Bergmeister", which featured an overhead cam 3,614-cc engine that could develop 120 hp (89 kW) at 3,600 rpm; this car had a top speed of 90 mph (140 km/h).
In 1934 the company merged with Steyr Automobile, creating the Steyr-Daimler-Puch conglomerate. However, in this same year, Austro-Daimler was dissolved.
In the 1970s and into the 1980s bicycles were made by Steyr-Daimler-Puch with some models bearing the Puch trademark, and more upscale models bearing the Austro-Daimler trademark. When the bicycle manufacturing aspects of the consortium were sold in 1987 to Piaggio & C. S.p.A. of Italy, the Puch trademark was conveyed however, the rights to the name Austro-Daimler were not sold. Since then no bicycles have been made bearing this trademark. 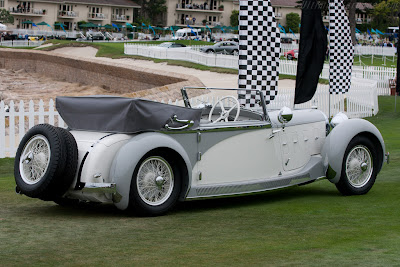 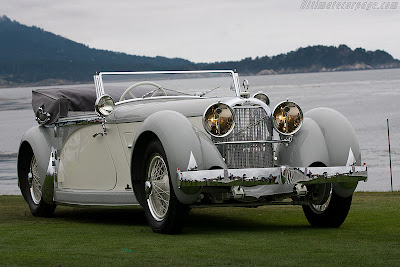 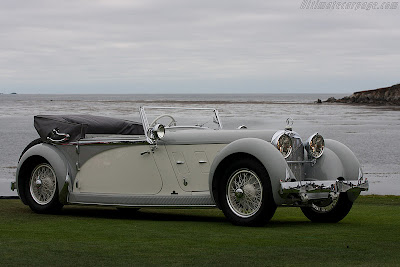 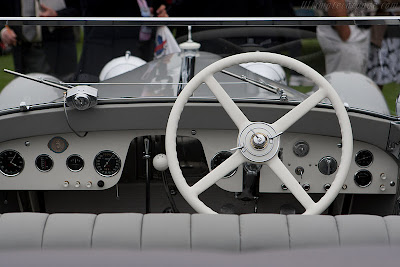 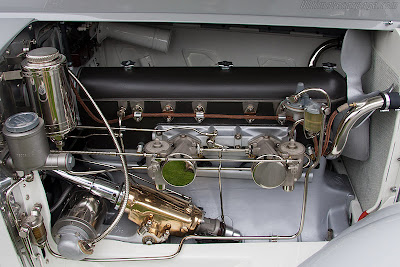 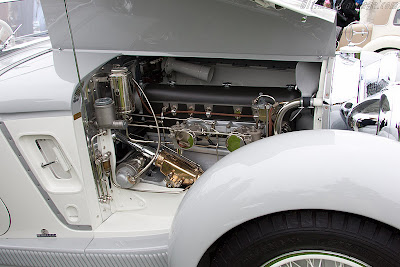 Email ThisBlogThis!Share to TwitterShare to FacebookShare to Pinterest
Etichette: Austro-Daimler